There aren’t many breweries who only make one beer for the market, but that it is the case with Orval.

Brasserie d’Orval is one of the six remaining Trappist Monasteries of Belgium.  (There is also La Trappe in The Netherlands, Engelszell in Austria and the newly designated Spencer Trappist Brewery at St Joseph’s Abbey in the United States).

This classic Belgian Trappist Blond Ale is golden orange in colour, supporting a fluffy white head.  It has a fruity aroma, with a bretty yeast funk in the background.

A complex combination of flavours come in waves.  First a little tart sourness, then fruit flavours of pear and green apple, with a crisp malt backbone and gentle spicing.  The cultured Orval yeast, along with the Brettanomyces yeast, add further layers of flavour and complexity.  A good level of carbonation enhances the peppery spikes, and contributes to a pleasant bitter finish.

This beer is becoming increasingly hard to find.  We managed to source a few cases on our last trip, so thought we’d best get this beer into the packs at the first opportunity! 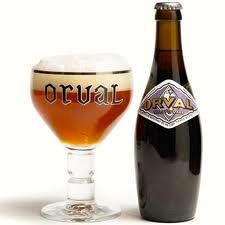