Belgian IPA's are generally not as aggressively hopped as US IPA's, but Magma is a bot of an exception for Belgium.  An amber coloured beer with the bitterness of an American Imperial IPA, balanced with the fruitness and body of a Belgian tripel.

Czech hops for bittering and dry-hopping with Simcoe provides a wonderfully punchy tropical fruit and citrus nose.  The flavour has the sweetness of fresh summer fruits - pineapple, mango, apricot - with sweet biscuit maltiness against the strong background of IPA bitterness.

The harmonious marriage of two beer styles makes this an incredibly unique and enjoyable beer.  The beer has been described as the best of old-world tradition, with the best of the new world innovation.

Beer Fact 1: Troubadour Magma was included in US Draft Magazine's 'Top 25 Beers of the Year' in 2011, describing the beer as 'an exceptional riff on a hallmark American style'.

Beer Fact 2: once a year, at the end of summer, the boys at the Troubadour brewery make a special version of their Magma; changing one element of the original beer.  The first few years simply saw a different dry-hopping - 2011 was Cascade, 2012 was Sorachi Ace, 2013 wass Galaxy.  2014 saw the beer fermented with three different yeast strains.  2015 sees the yeast experimentation continue with 'Tripel Spiked Brett'. 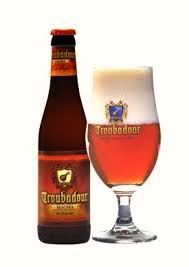