The Het Anker brewery is in the city of Mechelen, near Antwerp, and is most well known for their ‘Gouden Carolus’ range of beers.  This beer isn’t part of any label range, rather a one off beer brewed to celebrate an historical legend of their city.

The story dates back to a night in 1687, when the moon that night projected an unusual reddish glow. A drunken guardsman stirred from his stupor and looked out over the city that was wrapped in a dense blanket of fog. The red glow through the fog bounced off the roof of the beautiful tower of Saint Rumbold’s Cathedral, deceiving his bleary eyes.  He raised the alarm that the tower was on fire,

The city guard sprang into action, racing toward the tower.  But before they could get there, the moon has moved through the fog and the red-orange glow of the tower disappeared, giving the impression the fire has been put out.  From that moment on, the Mechelen’s were known as ‘Maneblussers’, which translates as ‘Moon Extinguishers’.  Hence the firefighter on the label!

The beer is higher in alcohol than a typical witbier, tending toward a blonde.  The aroma is rich in citrus and banana.  The yeast character carries through in the flavour, with a fairly light malty body, citrus, coriander and a prickly finish. 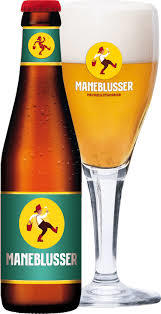