Some breweries (and their beers) seem to fly under the radar, somehow being spectacularly solid without coming to any great prominence.  Het Anker would have to be one such brewery.

One of the buildings dates back to the early 1400’s, which then was a hospital attended by an order of nuns.  In recognition of their contribution to the city, in 1471 they were granted permission to brew beer without taxes.  And there has pretty much been a brewery onsite since then.  Now controlled by the 5th generation of the Van Breedham family, the beers produced at Het Anker are all pretty awesome.

The Ambrio was the first beer produced by the old brewery to a recipe dating back to 1421.  Het Anker recently recreated this beer, and they say they are the only brewery making this type of beer which was the typical brew for the Mechelen region.  (Although the current version is slightly heavier than the original which was at 6.5% ABV).

It has the light body of a blond, with the deep flavours of a darker beer.  A semi-sweet malt body of caramel and toffee, beautifully balanced with a nice hop bitterness, raisins, dried berries, woodiness, gentle spicing and long aftertaste. 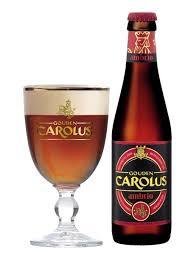