This was quite a tricky beer to describe if I’m honest.  Normally taking the lead from the brewery, I was tempted to class this beer as an amber ale.  But it is way too big and bold for that.

As you see I’ve put it in the barley wine box.  But it isn’t really the rich and heavy malt bomb you’d expect from a barley wine.  Maybe we’ll call it an American style barley wine, slightly heavier on the hops than European style.

The beer is indeed amber in colour, and I guess it is reasonably rich.  Mouthfuls of caramel malt, brown sugar, molasses, dried dark fruits like raisins and currants, all balanced by a good dose of French hops.

The influence of the cognac barrel is there as well.  Notes of vanilla and oak come through, and the hint of the sweet cognac are also there.  It is quite a boozy beer too, with more than a hint of heat from the 9.5% ABV.

It is definitely a beer to sip on.  Take it easy and allow it to warm and this beer will change over time.   I definitely enjoyed this more as I went along, with it presenting more flavours as it opened up. 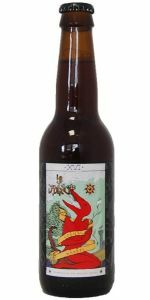