We’ve come to expect interesting, out-of-the-box beers from White Pony, and this beer is no different.  They brew many of their beers in Belgium, though they don’t have a monogamous relationship with any one brewery.  This particular beer is brewed at the Fort Lapin brewery, just north of Brugse town centre.

The label had me intrigued from the start.  Luckily Stu who works with us is a massive basketball player and fan, so he explained the meaning of the name.

According to the Urban Dictionary, it is a basketball term for ‘when a person crosses over or changes directions very quickly, getting another player so off balance that they fall over’.  Now the label makes sense!

Barley wines are normally big, rich malt bombs, and that is the base of this beer.  The use of rye adds an interesting spiciness that cuts through the sweet fruits and caramel malt.  American hops add another dimension, with a nice hop bitterness coming in late. 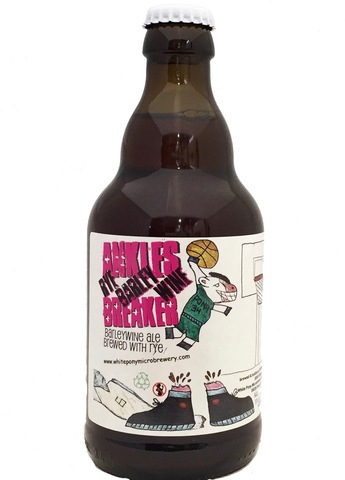