I don’t know about you, but I’ve been enjoying these White Label barrel aged offerings from the (new) Emelisse brewery.   So we’d best feature another from their initial White Label range which consisted of four different beers.

This is the only Barley Wine, but it isn’t their core range barley wine, which is a bigger, heavier and higher in alcohol.  This one comes in at 10%, which does have a slightly light mouthfeel for the style.

The bourbon barrels are still quite evident, despite the fact this beer has been in bottle for nearly 12 months now.  The aged has softened out the flavour well, integrating the bourbon character with dried dark fruits, caramel malts, brown sugar and woody notes.

The alcohol is covered really well, with just a pleasant warmth giving away the size of this beer.  The aftertaste is long and smooth.

There were only 2000 of these beers bottled from the bourbon barrel blends. I think this is my favourite of the four new White Label beers, though I am a sucker for a barley wine. 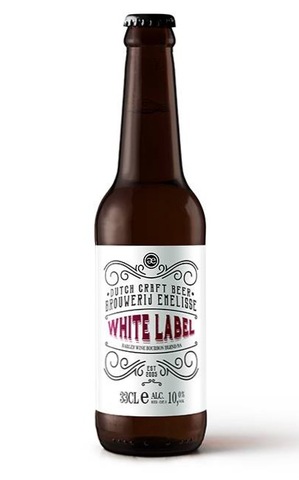