In 2016 the Abbey of Val-Dieu celebrated 800 years of history.  To mark the milestone, the brewery created this special Belgian Pale Ale called Cuvee 800 (of course).

Val-Dieu are the only true ‘abbey beers’ with the beers still brewed on the site.  Most abbey beers are a commercial arrangement for a brewery to brew beer under licence using the abbey name.

Back to the beer, and it is no surprise that it is a really good beer.  I was more than pleasantly surprised when this arrived and I first tasted it.

A really yeasty aroma offers up banana and clove, with a bready malt note.  The beer is really vibrant, well carbonated, kind of bouncing the bubbles of flavour over your taste buds.  And tasty it is.

Light grainy malts mix with fruit flavours of banana, pear and lemon citrus.  There is also a grassy, slightly herbal note from the hops which lift the mouthfeel of this beer as well.  As it warms a little the flavours soften to present a beautifully balanced beer.  One that I very much enjoyed, and a fitting tribute to the colourful history of this abbey.

See all of the July 2021 monthly six pack 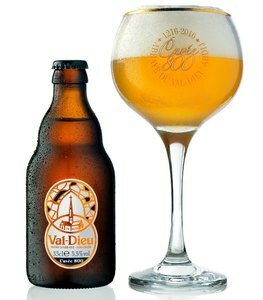