From a Wallonian brewery which has been independent and family owned for more than 150 years, this classic Belgian witbier is a multi-award winner in its style.

It is a typical cloudy, straw yellow, with a huge snow white head.  It smells inviting - lots of orange zest and coriander, along with the yeast.

The beer virtually explodes in the mouth, the carbonation making it seem as though the yeast is fermenting on the spot. Citrus flavours are mixed with the gentle spices, as well as light malt.

This is a mellow, smooth and refreshing beer.  And it is one we are happy to advise serving cold!

Awards for the beer: This clever little beer has been awarded 'World's Best Wheat Beer' at the 2009 World Beer Awards, as well as 'Europe's Best Belgian Style Witbier' in 2012.  Most recently, the beer received the 'Europe Silver' award at the 2013 World Beer Awards. 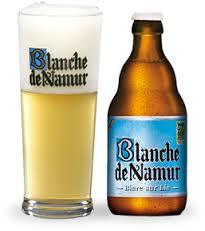