The name is quite a mouthful, but the beer inside the bottle is as well.

We first visited the Chouffe brewery many years ago.  A rustic brewery set up in a small village at the foot of the Ardennes.  Characterised by the gnome (‘chouffe’ is the Flemish word for gnome/fairy), it has retained a soft spot in our beer hearts, even after the brewery was sold to the Duvel Moortgat group in 2006.

Responding to the international demand for more hoppy beers, the Chouffe brewery was one of the first to embrace the Belgian IPA style.  This beer is something of a cross-over, and it probably best described as a very hoppy tripel.

The strong dose of Saaz-Saaz, Tomahawk and Amarillo hops produces a delicious aroma of tropical citrus and grassy spice.  The hops carry through into the taste, combining with a crisp malt body and fruity yeast character.  It is finishes wonderfully dry, and leaves a moreishly intriguing bitter aftertaste. 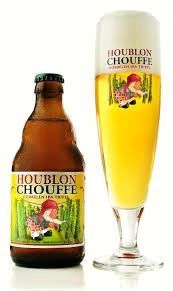