Another of Tony Traen’s beers – the Viven Imperial IPA.  This was the first Viven beer I’d ever tried, about 6-7 years ago sitting in t‘Brugs Beertje (The Little Bruges Bear) in beautiful Bruges. (Coincidently, I’d thoroughly recommend it as a venue for such research!)

It was a Belgian IPA, but very different to most Belgian IPA’s I’d tried.  These are generally quite reserved in hop character, tending much more to the earthy, grassy hops rather than the fruity, aromoatic hops we’ve come to expect from IPA’s.

After taking over the reigns of the brewery, brewer Tony declared ‘the idea to apply our Flemish brewing art to non-Flemish beers’.  I think he achieved that with this beer.

The Viven Imperial IPA doesn’t shy away from using the typical hops, and in decent amounts.   Simcoe and Tomahawk give a lovely citrus and peach fruitiness and assertive bitterness, which is then balanced by a caramel malt body heavy and strong enough to carry all the hops.

When this beer was first introduced at the 2009 Bruges Beer Festival, it was voted second best beer – beaten only by Westvleteren 12!

See all of the November 2016 monthly six pack 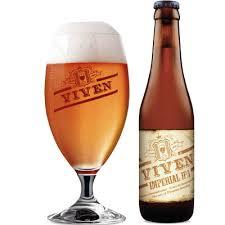