Piraat is one of those beers, something of a classic for the Belgian beer lover.  Heavily influenced by the US beer scene, Belgian breweries have been featuring hops more prominently in their beers.  Or as in this case, making a variant of a classic to feature the hops (a la Duvel Tripel Hop).

But don’t expect a US-style hop bomb here.  It is still very much a Belgian style beer, with very reserved hopping.  There is a noticeable difference between this beer and the original, but it is more a more heavily-hopped Belgian strong ale than a Belgian IPA.

The normal Piraat is the base for this beer, with four different hops used at three separate times – hence the Tripel Hop.  Saaz, Tetra and Aurora are used in the boil, with Cascade used for dry-hopping.

The result is a beer which smells of sweet grassy hops combined with Belgian yeast esters.  It has a fairly thick malty body, lots of fruity sweetness with caramel malt and Belgian candi sugar.  This is broken up by the earthy hops that provide a lift and a lingering bitterness to balance the sweetness before it becomes cloying.  And it doesn’t shy away from the booziness either, but it is 10.5%!

See all of the November 2016 monthly six pack 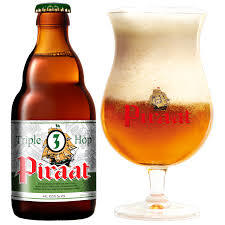