We’ve had a few beers from La Debauche in the past, and they don’t really seem to specialise in any particular style.  Rather, we’ve had beers across a really broad range of styles, and they have all been very good beers.

So here we have a dark beer from their range – a black IPA.  This style seemed to have its moment of fame a few years back, but has quickly disappeared from all but a few brewery portfolios.  A big shame really as I think it’s a great style of beer.

As far as black IPAs go, this is quite a ‘stouty’ one.  There is a good dose of roasted malt in the body, giving flavours of dark chocolate, coffee and a hint of liquorice.  There is also a little fruity character in the background, suggesting some citrus and dark berries.

The body has an inviting sweetness early on, which kind of gives way first to a roasty malt bitterness becoming more of a hop bitterness as the beer progresses.  Although it has a sweetness in the mouth, it finishes reasonably dry with a lingering bitterness. 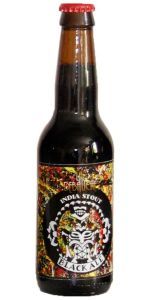 DOK Brewing Black To The Future