The Brussels Beer Project is an initiative that began when two friends decided they wanted to brew beer, but in a different way to that which defines traditional Belgian brewing.  A successful crowd-funding campaign in 2013 saw the creation of this very different beer company.

They started as gypsy brewers, and still brew the majority of their beers out of Brouwerij Anders, though they do have a small brew pub set-up in the heart of Brussels which gives them a convenient and visible home to showcase their creations.

Dark Sister was one of the earliest beers conceived, imagined as a winter seasonal offering that differed from the traditional high alcohol, spiced dark Christmas beers that Belgium is famous for.  It was decided to make a dark beer version of their first success story – Delta IPA.

It has a fresh fruity aroma, combining hints of tropical fruits with darker stone fruits.  A dark roasted malt body gives flavours of bitter chocolate, coffee, citrus, molasses and a hint of licorice.

It’s a really interesting Black IPA which combines the lighter, tropical side of an IPA with the more complex body of a bigger beer style and depth of flavours that good dark beers offer.  Looking forward to more beers from these guys. 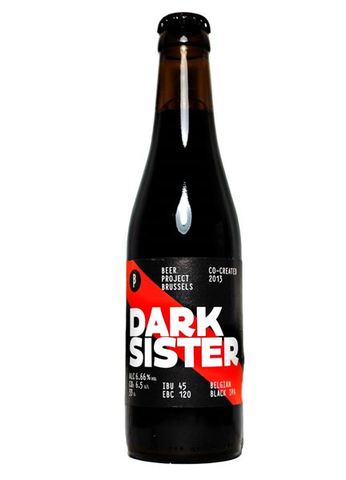