Typical of his craft brewing brethren, Partizan brewer Andy is a creative.  Though in some of his beers I really think his former life as a chef has a big influence – like in this saison featuring rhubarb and ginger.

Saisons as a beer style lend themselves well to the addition of some interesting fruits, vegetables and other botanicals.  (Reference Dany Prignon’s Fantome beers for some crazy examples).  But rhubarb and ginger are not so common, though do provide an interesting balance to the beer.

The saison yeast is present, though it takes a back seat to the ginger which is dominant in both the aroma and flavour.  A good dose of acidity from the rhubarb presents as tart, and balances the bite of the ginger.  The background farmhouse funk and slight spiciness adds a prickle and extra level of interest.

To say that this beer is refreshing would be an understatement.  A lovely crisp light body, with good carbonation and a very dry finish keeps you wanting another sip.

It is a really clever little beer, packing a load of character and flavour into a relatively low ABV body. 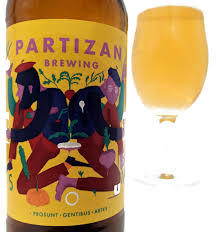