It is a slightly cloudy golden blonde ale, which is something of a cross between a Saison and a White Beer. There is 20% wheat used in the beer, which has a deceptive hop 'bite' that carries through from start to finish.

The nose is quite subdued - a little earthy hop, very faint fruit like melon and lemon and restrained Belgian yeast aromas.

The flavour is a well balanced combination of hop bitterness and a little sweetness from the malt. As you drink through the beer, the sweetness seems to subside a little. The beer is well carbonated, which gives it a very crisp nature. A perfect thirst quencher, though enough layers of flavour to explore as well.

Brewery Fact: since 2006 all of the Urthel beers have been produced at De Koningshoeven Brouwerij in The Netherlands - better known as the Trappist Monastery which produces the renowned La Trappe Trappist Ales. 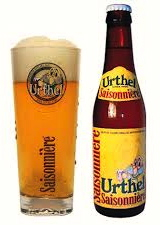