Its an unmistakably Alvinne bottle in the packs again, but those who aren’t fans of the sour, please don’t despair. This is something a little different from Alvinne.

Land van Mortagne is one of the base beers.  It is nominally classed as a quadrupel, but pushes some boundaries of a big barley wine.  (And is then confused by the use of the crazy Morpheus yeast)

It smells big and sweet, slightly fruity and funky. The flavour is a pretty complex combination of a multitude of things.  Initially sweet with plums, raisins, cherries, caramel malt, dark sugar and fortified wine.  A little sour acidity grips the sides of the tongue for a short time before the warm, smooth fruit and malt body takes over again.

It finishes reasonable dry, with a long slightly bitter, slightly sour, somewhat sweet aftertaste that hangs on the tongue and in the throat for a good while.  Rest, repeat! 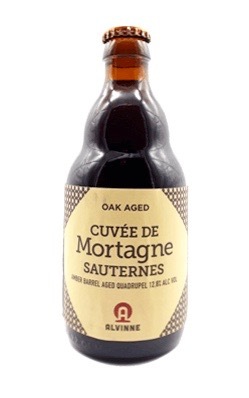