The story behind this beer and brewery is a good one, as is often the case.

Twin brothers Erwin and Benny were showing a keen enough interest in beer to warrant their wives signing them up to a homebrewing course run by none other than our friend Davy at Brouwerij Alvinne.

So in September 2012, the twin brothers made their first steps toward becoming brewers.  Less than two years later, with just their fifth brew the boys won the award for ‘Best Hobby Beer’ at the Belgo-Dutch Low Countries Brouwland Beer Competition.

The prize was the chance to brew a commercial quantity at Brouwerij Anders, and distribution in one of Belgium’s beer outlet chains.  Buoyed by the reception of the beer in the marketplace, Inglorious Brew Stars officially commenced operations in late 2014.

The beer they have to thank for their success is a beautiful dark quadrupel with an inviting aroma of roasted malts, caramelised sugar, bitter chocolate and hints of coffee.  These all follow through in the flavour, with the sweet lingering addition raisins, prunes and figs, and a hint of woodiness.  It is quite a complex, lasting flavour with just a hint of alcohol warmth giving away the high ABV.

See all of the October 2017 monthly six pack 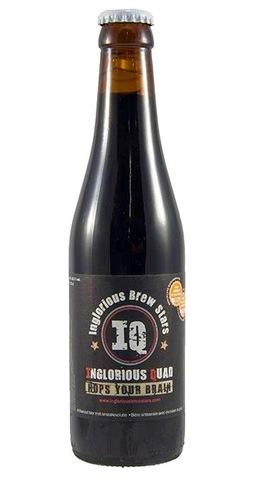