If there is one thing we know about Alvinne, it is to expect the unexpected.  And Gaspar is something different.

It is a little hard to categorise this beer into a particular style.  We’ll nominally call it a strong blond ale, but throughout the beer I get hints of a saison, a tripel and a Belgian IPA.

Gaspar is one of Belgium’s most bitter beers at 115 IBU.  It sounds a bit of a beast, but there is enough else going on in the beer to soften this bitterness out.  The Morpheus house yeast is in there, and is brewed with pilsner, pale and chocolate malts plus wheat.

It’s a light, slightly hazy colour, with a fairly subdued aroma.  There is a little malt sweetness right at the start, and an interesting hit of the Morpheus yeast.  The bitterness come on hard, but is softened by a little fruity/grassy hop hit, as well as interesting hints of spices like coriander and pepper.

Of course there is a lingering bitterness, but also enough interesting components to quickly invite another taste. 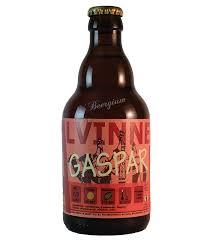