I was a little stuck as to which beer to include as the ‘big gun’ for this pack.  The natural choice would be a Belgian Christmas Beer, but I only has Delirium Noel and Struise Tsjeeses on hand, and we’ve included these in the recent past.

The beer needs to be big, rich and delicious, so while a few of you have probably had this beer before, I’m guessing you won’t mind having it again.  And if you haven’t yet had the pleasure, you should look forward to sitting and sipping this beer as it evolves once opened.

Initially sweet with ripe dark fruits like plums, raisins and cherries, there is a thick dark malt body with more than a hint of dark chocolate in the slight roasty notes and enough hop bitterness and yeast character to prevent it from being cloying.

Take your time and let this beer open right up as it warms, it would be a shame to drink this too cold and too quick.  And the gently warming glow you’ll feel is the only indication to the big alcohol of this beer.

Beer Fact : the term 'Quadrupel' is an American introduction to the beer language, and not one readily adopted by the old school Belgian brewers.  When first entering the market in September 2010, this beer was the first Belgian beer to include the term 'quadruple' in its name.

See all of the October 2013 monthly six pack 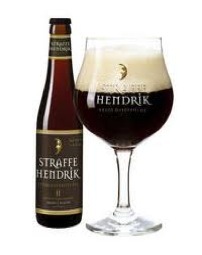