You may have tried the Alvinne Mad Tom from a couple of years ago, when it had a different (pinkish) label and was much more of a bitter beer than this second version is.  It is a slightly strange concept to radically change the recipe of a beer, and retain the original name, but we've come to learn that the Alvinne boys aren't exactly conformists.

This second version of Mad Tom is classified as a session IPA; a point which is made very obviously on the label.

It is a little beer of 4% but is full of character, principally from Alvinne’s house yeast Morpheus.  The aroma is full of the Morpheus character, and the simple nature of the beer seemingly highlights the funky, earthy, spicy and slightly sour attributes of this amazing signature yeast.

The beer is hopped with Cascade and Chinook, then more Cascade for dry-hopping.  While they play second-fiddle to the dominant yeast character, the beer is quite bitter with a little fruity hint and finishes very dry.

See all of the January 2017 monthly six pack 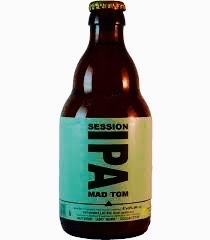