This beer is timed for this months pack as it was brewed to commemorate the 65thanniversary of the Bloemencorso Loenhout last year.  The event is an elaborate flower (bloemen) parade, with groups preparing colourful floats to drive through the city streets.

The event takes place on the second Sunday of September each year, so we’ve just passed the 66thannual celebrations!

The name ‘Amis Fleur’ is actually a type of Dahlia, and is recorded as number 892 in the worldwide Dahlia Register.  (Hopefully you can use that tidbit in a trivia night some time!)

The label tells you its an IPA, but I’m going to call it a Belgian IPA.  It is full of hops, but of the European kind rather than the punchy American hops we are now so used to.  It has a strong citrus note, with a good level of earthy bitterness.

It is a little cloudy and has a little tart funk to it from the yeast, and at stages while you are tasting it might remind of a light saison.   Whatever we call it, enjoy it on a warm afternoon, basking in the knowledge you now know more about Dahlia’s that you did before!

See all of the September 2018 monthly six pack 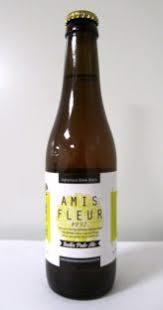