St Feuillien is one of the many Belgian ‘Abbey’ Beer labels, which simply means there is (or was) a connection between the brewery and particular religious order.  As of 2011, there were 18 officially recognised ‘Abbey’ breweries.

‘Grand Cru’ was a term originally borrowed from the wine industry, and has come to signify the best beer, or the one the brewery is the most proud of for some reason of distinction.  So most beers that are labeled ‘Grand Cru’ will be very decent.

And this beer is no exception.  It pours wonderfully light, even for a Belgian blonde ale, with the bubbles working the liquid hard to create a highly carbonated mouthfeel, almost like champagne.

The body is crisp, with just enough sweetness to hint at lemon, peach and green apple, with the noble hops providing a floral, grassy bitterness to the moreish dry finish.

It goes alright, as evidenced at the 2012 World Beer Cup where this beer won ‘Europe’s Best Belgian Style Strong Pale’. 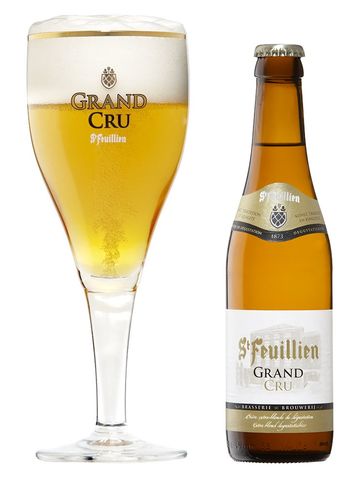