Brouwerij Kievit is the second of the Trappist Monasteries in The Netherlands.  Although it has existed as a monastery since 1938, it was formerly operated as a cattle farm.  Finally deciding this business was too labour intensive for the small number of monks, they opted to start a brewery as the means of earning funds to keep the monastery and go about their local charitable endeavours.

So in December 2013 they brought their first (and only at that time) beer to market – the Zundert 8 Tripel.  It wasn’t until 2018 that they were confident enough in their newly found brewing skills to introduce a second beer.

Zundert 10 is a big Belgian Strong Dark Ale, or we’ll agree to the US convention of labelling it as a quadrupel.

It has a really yeasty aroma, that seems stronger than it does in the flavour. A really malty beer, this has a dark and sweet character with toffee, caramel, figs and raisins.  The beer dries out toward the finish, with a noticeable hop bitterness lifting the mouthfeel.

Quite a rich and luxurious beer, designed to be sipped and savoured. 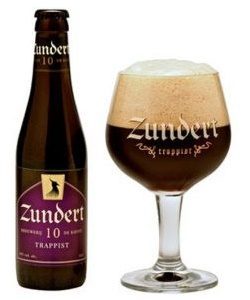