The Brew Society is a Belgian organisation that was established with the intention of helping brewing entrepreneurs.  Originally starting their brewing activities as gypsy brewers, they have gone on to find a home in the town of Heule, in West Flanders.

They now offer a facility for budding brewers to turn their beery dreams into reality by booking time on the brewing equipment.  They also brew many beers under contract, and of course have their own line of beer that they market under the ‘Martha’ label.

And we’ve gone straight to the top with Brown Eyes, this is the Belgian style quadrupel weighing in at an impressive 12% ABV.

This was a really enjoyable beer, with two things that really stood out to me.  Firstly, there was a hint of imperial stout about this beer, with roasted malts standing out a little more than in a standard Belgian quad.

The second was how easy drinking it is for the ABV – where the hell is that 12%??!!  Lots of dark fruit flavours of raisin and fig, along with some cherry notes and a little licorice.  Just a tasty beer that I really enjoyed (but thought better of having another!)

See all of the June 2021 monthly six pack 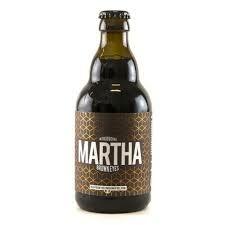