Ter Dolen has to be one of the most picturesque and unique breweries to visit in all of Belgium.  Housed in a beautiful 16th century castle that was home to the abbots of Sint-Truiden, the castle was in a state of disrepair when it was purchased by one of the founding brewers in 1990.  Over four years it was extensively renovated and now hosts the brewery, bar and guest house.

A European summer afternoon is the perfect time to take up temporary residence in the large outdoor terrace and sample the offerings of the brewery while taking in the history of the buildings around you.

Armand is a beer first produced in 2011 in tribute to one of the founding brewers; Armand Desplenter.  It is a delicious Belgian blond ale, dry-hopped with cascade hops.

There is a good dose of citrus and grainy malt in both the aroma and flavour.  A clean, light malt body combines with grapefruit and lemon citrus and an earthy hoppy bite.  Good carbonation adds to the sharp mouthfeel with a nice spicy, bitter aftertaste that lingers.

See all of the June 2017 monthly six pack 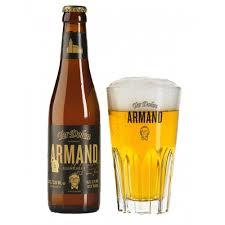