Hopsinjoor is the newest member of the Gouden Carolus range.  It was first introduced at the 2008 Zythos Beer Festival, where it was elected as the ‘Consumers Choice Beer of Show’.

The name is derived from ‘Opsinjoor’, a mythical character from the Mechelen region.  He is the eternal drunkard, who is punished by his wife.  It is also a play on the word ‘hops’, as five different hops are added at various times throughout the brewing process.

This beer has a lovely light fruity malt backbone, matched against the earthy, grassy old-world hops.  There is also a strong yeast character adding to the complexity of the beer.

It drinks very softly for a beer of 8%, having a very light mouthfeel and fresh, dry lingering aftertaste.

See all of the June 2015 monthly six pack 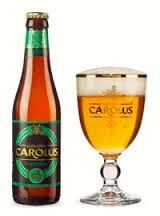