The new team at Emelisse/Slot Oostende Brewery have been slowly stamping their personality on the Emelisse range since they began taking over in October 2016.

One of the true signatures of the old Emelisse brewery was their White Label range of barrel aged creations. We’ve featured a few of the subsequent White Label offerings under the new stewardship, but this is the first of the new signature ‘Barrel Finished’ beers.

And it seems appropriate that the first beer is a 13% Russian Imperial Stout (or ‘IRS’ as seems the convention for our Dutch brewers), with the chosen aging cask formerly home to a batch of Bowmore Whiskey.

It is a big beast of a beer, thick and rich pouring from the bottle like engine oil which settles quite still in the glass.  A decadent aroma wafts from the glass.

Dark chocolate, roasted malts, toffee, a little coffee and a hint of wood smoke are all present. The beer only spent 5 weeks in the barrel, so the peaty Bowmore character is only subtle; but it is there. 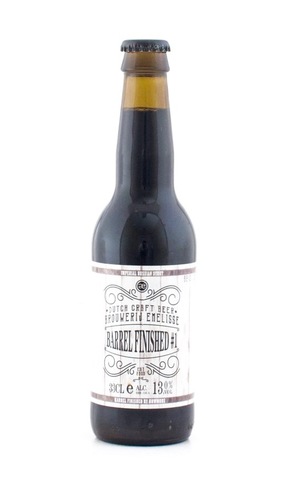