Hof ten Dormaal is a traditional farmhouse brewery from Haacht in Flemish Brabant.  It is known for growing and using their own hops and malt.  And they are the only brewery in Belgium to use Witloof in their beers.

Witloof is known by a few different names.  In Dutch it translates as white leaf, it is also known as endive in Belgium, chicory in the UK and Belgian endive in France.  Whatever its name it used to be an important agri-product for Belgium.  In the 1970's it accounted for around a quarter of all vegetables grown in Belgium.

When raw, they are crisp and bitter.  Cooking them allows the flavour to soften with a nutty character.  This beer uses dried chicory root to replace some of the hops.

The beer itself is a little hard to put into a style box.  The aroma is very Belgian with a good dose of banana, citrus, clove and a little herbal spice.  There is a solid malt body, with a certain sweetness early on.  It isn't overly bitter, though there is certainly a strong herbal character in the beer that seems to finish a little woody with the slightest hint of sour right at the end.

See all of the February 2021 monthly six pack 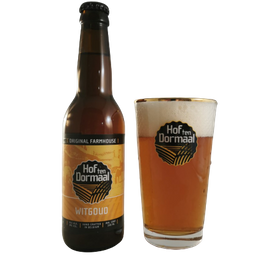