Malheur is made by Brewery Malheur (formerly Brewery De Landtsheer), a small family brewery operating in the small town of Buggenhout.  (Keen Belgian beer fans will know this is also the home town of  Brewery Bosteels - famous for Tripel Karmeliet, Kwak and Deus Brut des Flanders)

As with many Belgian brewing families, they have a long brewing history which dates back as far as 1773.  But this current brewery was reopened in 1997.

The Malheur 12 is the jewel in the brewery crown.  A magnificent quadrupel of 12% ABV, which opens with a sweet and spicy body.  Plums, raisins, caramel, burnt sugar and chocolate combine with an interesting spice mix of nutmeg and clove.  It then adds an earthy, spicy yeast flavour cut through with a much more bitter hop presence than normal quads.  It is dangerously drinkable for the alcohol content.  Be warned!!

The beer was awarded 'World's Best Dark Beer' at the World Beer Awards in 2013 and again in 2014.  Fair recognition for this delicious beer.

About the brewery:  The word Malheur translates to 'misfortune', which is hardly a word I'd use to describe any of their beers.  They are one of two breweries (the other being Bosteels, just up the road) to make true champagne-style beers! 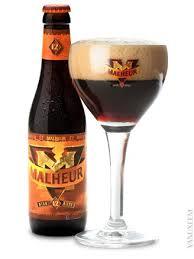