Another brewer coming from a home brewing background, Andy Prearis entered his Quadrupel into the annual ‘Brouwland Biercompetitie’ in 2011.  His beer won the competition and he was voted ‘Best Hobby Brewer 2011’.

The beer is dark brown, with tinges of red and a tightly packed tan foam.  The aroma is typical of a quadrupel – raisins, figs, plums, brown sugar, clove, cinnamon.

To taste, the beer starts with a fruity, burned sugar sweetness.  Roasted malts and spicing serves to break up the sweetness, and the beer dries out as it progresses.  There is a deep lingering aftertaste highlighting the richness of flavours, with a little warmth from the big body to round things out.

Another award: in 2013, the beer ratings website Ratebeer elected the brewery the ‘Best New Brewer in Belgium’.

See all of the December 2014 monthly six pack 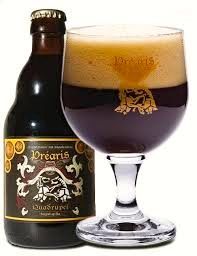