This beer hardly needs an introduction.  Duvel has been a Belgian classic for decades.  It is the flagship beer of the brewery, and the iconic short squat bottle - one of three standard bottles used in Belgium - is affectionately known as the 'Duvel bottle'.

But even the big boys need to keep up with changing palettes, so a few years ago Duvel Tripel Hop was introduced.Normal Duvel recipe is used as the base, but rather than the standard two hops used, a third hop is added.  In 2012 is was decided to make this version an annual production, and change the extra hop each year.  The 2012 year was Citra, and 2013 is Sorachi Ace.

The beer is a beautiful glden colour with a creamy white head.  There is an inviting aroma of grassy hops, suggesting grapefruit, lemon zest, light stone fruits and a little gentle spiciness.

The flavour is a delicious mouthful of juicy fruits and floral, grassy hops, supported by a solid malt base.  There a flashes of pepper, that wake up your tastebuds as the beer dries out really well, to leave a long, gentle bitter finish.

Did you know?  The first Duvel Tripel Hop was made in 2007 with Amarillo hops.  It was only after a bet with the CEO that it came into being again.  The bet was whether the 'We Want Duvel Tripel Hop' Facebook page reached 10,000 likes.  It did - easily - and true to his word the CEO introduced the tripel hop again.

See all of the December 2013 monthly six pack 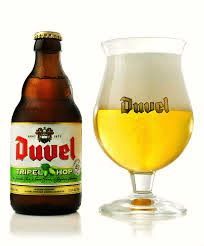