We welcome Brouwers Verzet to our beer club. I first had this beer several years ago, sitting in the summer sun at the Moeder Lambic bar in Brussels.  It was something very different for a Belgian brewery and one that stuck in my head…until now.

The brewery was started by three students who were in the final year of the biochemistry degree.  There was an offer to the students to study brewing science, and only three students accepted.  They went on to found Brouwers Verzet together.

With brewing pedigrees including De Proef and Omer in Belgium, and New Belgium Brewery in the US, the guys have experience brewing across a broad range of styles, and atypical for Belgium.

Golden Tricky is a tribute to their local priest Patrick, whose nickname is ‘Tricky’, when he was heading off to India for volunteer work in India, were mangos are the national fruit.

It’s a crisp, light bodied beer with a refreshing bitterness and subtle Belgian yeast character. Ella hops from Australia provide the tropical mango character.  (No mangoes were harmed in the production of this beer!) 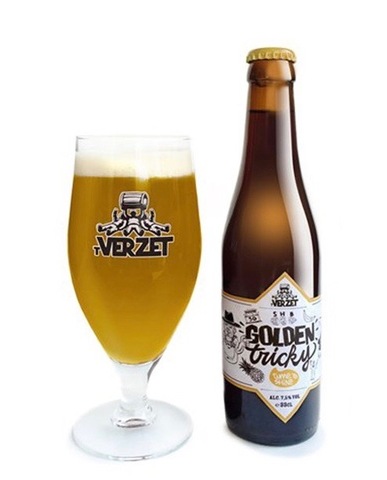