This beer comes from the Van Den Bossche brewery, which dates back to 1897.   Better known for their ‘Pater Lieven’ label, though the ‘Buffalo’ beers have an interesting story as well.

We’ve had a few beers for which we have been thankful to US importers requesting a certain new beer be created.  This time, it is an Italian importer who asked for this beer to be made.

It is a hazy, golden orange colour, with a rocky white foam.  Typical for Belgian IPA’s the nose is not an assault of citrus hops – rather a subdued mix of lemon citrus, grassy earth, a woodiness and spice.

There is sweetness early on, maybe more than the nose suggests.  Hop bitterness joins in, along with the dry spicing and just a hint of wild earthy funk.  This beer has a very clean and lively mouthfeel.

Buffalo?:  The label was created in 1907 following something of a brewing accident, when the brewers left the daily brewing actions in the hands of the most junior member.  He was elected to stay at work while the res of the team attended Buffalo Bill’s travelling circus, which was performing in the town centre.

More on this story in later beer notes!

See all of the April 2015 monthly six pack 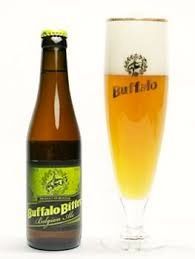