We’ve got another special beer from Barossa Valley.  It’s their from this years GABS beer festival.  It was really well received during and after the festival, so they good people at Barossa produced another batch.

The name pretty much describes the beer perfectly, and the narrative on the can gives up the inspiration.  We can thank a decadent milkshake from a US milk bar during the brewery owner’s time in the US as a young man.

The inviting aroma is a hint of what is to come.  A good malt bill makes up the base stout, and then we have the adjuncts being lactose and cocoa nibs for the creamy, vanilla-caramel character and of course the peanut butter.

Although it is the headline act, the peanut butter flavour is held in check really well.  It is superbly balanced with the roasted malts of the stout, sweetened by the lactose and cut through with just enough hop bitterness.

It isn’t a massive beer for a dessert style stout, but is does have a solid mouthfeel and a lovely lingering aftertaste.

See all of the October 2019 monthly six pack 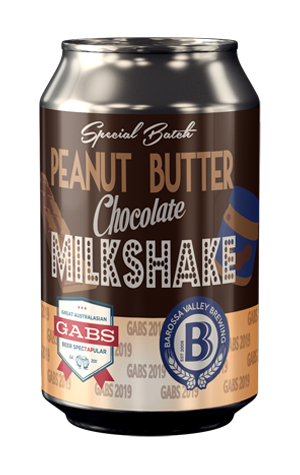