The history of the brewery in which this beer was brewed is as interesting as the beer is tasty.  In 2014 the Palm Corporation (which is majority owned by Bavaria NV, the Netherlands second-largest brewery company; after Heineken of course!), restored the 300-year old brewery in the town of Steenhuffel.

They installed a 1000-litre microbrewery, with the sole intention of using it to ‘experiment with herbs, spices, hops, fruit and wood’.  The brewery was named De Hoorn, in tribute to the 500-year old inn that once stood on the site.

I wasn’t sure whether I wanted to put this beer in the ‘Strong Blonde Ale’ or ‘Belgian Tripel’ basket; it probably sits somewhere in between.  Either way, it is an interesting beer to experiment with.

The beer is not aged in oak barrels, rather oak chips from an old barrel were added during brewing.  As a result, the oak character added is minimal to be fair.  But if you look, I’m sure there are added notes of vanilla and a little spice.

The base is a good beer, with a lovely malt body, lots of Belgian yeast character, strawberries, a gentle spicing and of course a bit of vanilla!

See all of the March 2018 monthly six pack 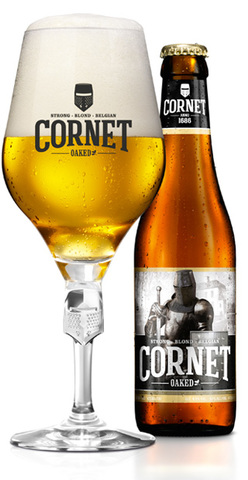