The Van Eecke Brewery in Watou is located near to the French-Belgian border in West Flanders, very near to both St Bernardus Brewery and the Westvleteren St Sixtus Trappist Monastery.

‘Hommel’ in the local dialect means ‘Hop’, and this beer is a tribute to the area once famous as a major producer of hops.  Of course it features, amongst others, two hops grown locally in Poperinge – Brewers Gold and Hallertau.

This beer was arguably Belgium’s first IPA, and has become the official beer of the tri-annual Poperinge Beer and Hop Festival.

Hommelbier is a golden bronze ale. The nose has typical Belgian yeast characters, combined with summer fruits and hints of spice.

The taste follows the aroma, initially sweet then citrus and floral hop flavours giving way to spice and peppery prickles.  Orange peel, honey and cumin are common descriptors of the flavour, though none of these are actually added.  The finish is dry without being overly bitter.

See all of the July 2014 monthly six pack 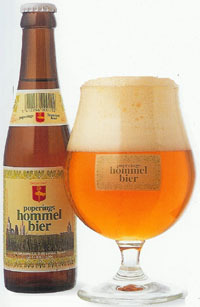