There is a good story behind the introduction of the Duvel Tripel Hop beers, which you can read in the notes on previous vintages.

Last year, after six different hop variants, Duvel re-brewed each iteration and produced a tasting pack with which they asked consumers to blind taste and vote for their favourite version.

Deservedly so (IMHO) the winner was the Citra hop variant, which was originally produced in 2012.  With the public vote, this is now the permanent specialty hop version of the Tripel Hop.

The third hop is added during the boil, as well as solely used for dry-hopping, and this really takes the classic Duvel to another level.

The Citra gives that lovely tropical fruit aroma and flavour.  Grapefruit, sour lemon, bitter orange light up your tastebuds.  A high level of carbonation and some prickly yeast spiciness make for such a crisp, light-bodied, easy drinking beer that completely belies the 9.5% ABV.  So enjoy….and beware!

See all of the December 2017 monthly six pack 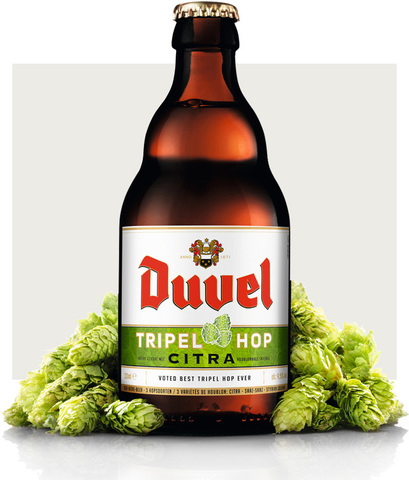