In 2009, the range was expanded to include more non-traditional Blgian styles, one of which was the American Porter.

The beer is full of roasted malt and light smokiness, mixed with a little chocolate, nuttiness and burned brown sugar.  Lying in wait is also a good dose of hop bitterness, with the beer finishing very dry.

We have two different labels on the bottles.  The standard label is as per the picture showing ‘Viven Porter’, while the beer is marketed in America as ‘Viven Smoked Porter’.

The Viven beers are produced at de Proefbrouwerij in Lochristi, near Ghent.  The ‘Proof Brewery’ is the birthplace of some of our favourite beers from Troubadour, Slaapmutske and even Mikeller. 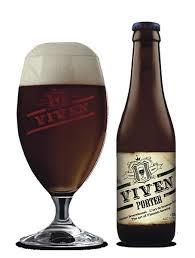