Gulden Draak is one of the heritage Belgian beer labels, having been first presented to the market in 1986 (though the history of Brouwerij Ven Steenberge dates back to 1874).  They were one of the first Belgian beers we could buy in Australia, and the classic white label of the ‘Golden Dragon’ is still an iconic beer today.

But as the beer drinking public demands a constantly evolving range of beer, we see more of the old breweries making new beers.  This is the newest beer to the Van Steenberge portfolio.

If you haven’t had the Gulden Draak, it is best described as a dark tripel.  Van Steenberg have taken this classic and added smoked malts.  It sounds like a fairly simple change, but a potentially divisive move given people seem to either love or hate smoked beers.

The base beer is still there, with flavours of sweet malt and dark stone fruits.  And to this we have the added smoky notes, it comes in the form of smoked ham or maple smoked bacon.  Nothing too intense or acrid, it really is a sweet smoky character that adds a really interesting dimension to this beer.

So which side of the fence do you sit on here?  Fan of smoked beers or not?  And if you know the classic Gulden Draak, are you happy with this variation or do you still prefer the original?

I’d best have another to confirm my opinion! 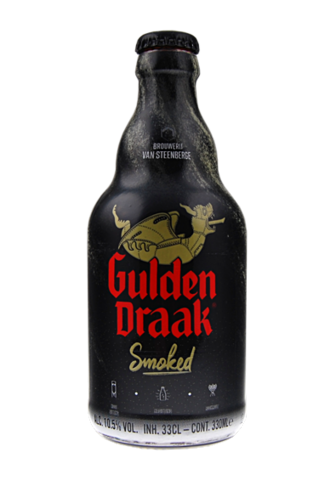