We always look forward to special editions of classic beers, and this from Van Steenberge certainly fits that billing.

We’ve had the 2017 edition in way back in March 2019, so some of you will be familiar with this beer.  But for those that haven’t yet had the pleasure, settle in for a treat.

First released in 2013, this beer was developed by head brewer Jef Versele as a tribute to his grandfather and former Van Steenberge brewmaster Jozef Ven Steenberge, and the brewery’s 230 year history.

Taking inspiration from visits to many US breweries, it was decided to age batches of the classic Gulden Draak in various whiskey barrels.  The result is this delicious limited edition beer.

Caramel malts, dark dried fruits, toffee, mild spices and just a touch of vanilla and the whiskey barrel all present in the aroma.  They follow through in beautiful balance in the flavour, with a little more spice coming through and the barrel character being skilfully restrained but adding an underlying layer of character to the beer. 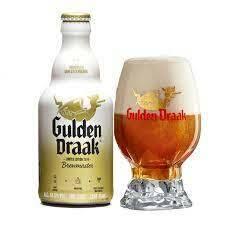