Another beer from the L’Arogante beer company, which brews its beers at De Proefbrouwerij near Ghent.  This time we have their Belgian Stout.

As we’ve mentioned before, De Proef is the birthplace of many different beers from a vast array of international brewers, not just from Belgium.

Made with five kinds of barley malt, flaked oats, three types of hops and a Belgian yeast, this stout is a little different to the average stout.

Lots of chocolate and coffee on the nose, which does follow through into the flavour. There is a dry roasted bitterness from the malts but also a noticeable hop bitterness.  A good whack of noble hops impart a real earthy bitterness.

It is an interesting beer, with loads of flavour for a lower alcohol beer (at least it is low on the Belgian spectrum), and a different style from the traditional Belgian range offered by many of the breweries. 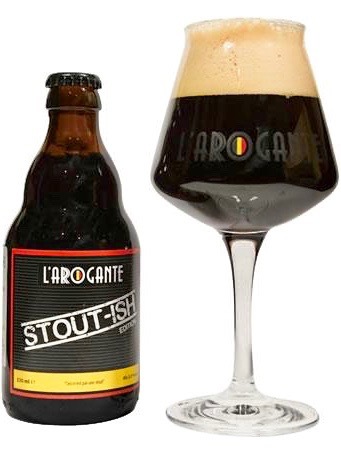