We think we are doing our bit for international relations with this beer from White Pony.  It is an American style Imperial India Brown Ale, from an Italian brewer who makes much of his beer at Belgian breweries.

So no surprise that White Pony brew an imperial version of something, Rob does love his big beers.

It pours a slightly murky orange brown colour.  There isn’t a lot of hop character in the aroma, which you might expect.  Rather it is dominated by sweet malts.

The flavour follows suit, lots of sweet bready, caramel malts, a little nuttiness with hints of dried fruits.  There is a firm bitterness there, and the beer finishes reasonably dry.

While I’d personally like a more assertive hop character to lift up the body of the beer, this will probably please the malt lovers out there.  And it has got one of the best beer names I’ve seen in a while!

See all of the February 2018 monthly six pack 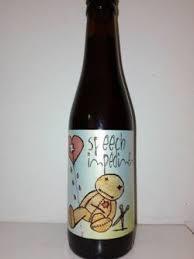