We’ve been talking to Andy from Partizan Brewing for a few years now.  He is one of London’s leading craft brewers, with a very small brewery located under a railway arch for the aboveground train line from London Bridge.

There is a great walk of about 1.25 miles from Bermondsey station back into London Bridge, following the above ground line.  It takes in 5 different breweries, a fantastic bottle shop (called Bottle Shop!), and a multitude of artisan bakers, cheese makers, charcuterie shops, coffee roasters, etc.

Andy has been hesitant to send any beer to Australia, not so much because of the distance, but rather that he doesn’t need to export to sell all his beer.  But he liked the idea of our monthly beer club, so he agreed to send a small amount our way, just for our beer club.

It took a little more convincing him to send a pale ale, and we agreed to put it straight into our next pack.  So here is the Partizan Brewing Pale.

A new pale ale first released in October 2016, this beer is crisp and dry, with just a little sweetness and a pleasant grassy, citrusy bitterness.

See all of the December 2016 monthly six pack 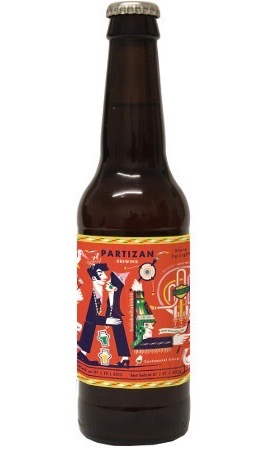