Hapkin is a beer with a dynamic history.

The story begins with Brouwerij Louwaege; a family brewery with a history dating back to 1877 and spanning five generations, until the brewery was purchased by the Alken-Maes group in 2002.

Of the many beers in Brewery Louwaege’s portfolio, only two survived – Hapkin and Thouroutenaere.   The brewery was closed after the purchase, and the old site is now residential accommodation.

Alken-Maes itself is a merger of two brewing companies – Maes and Alken – which made it the second largest brewing company in Belgium.  It was sold to Scottish & Newcastle (UK), which in turn was acquired by Heineken in 2008.  So lots of behind the scene changes, but the beer is still alive and kicking.

It is a strong blond ale in the style of a Duvel.   It is a clear golden orange with a thick foamy head.  Lots of Saaz hops and crisp light malts make for a lightly fruity, dry and somewhat spicy blonde ale. 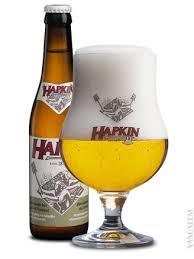