From Brugse to Ghent, and a tasty little beer from Brewery Roman.

This family brewery has its history dating back to 1545, just a few years after the 1539 uprising by the citizens of Ghent against Emporer Charles V.

The rebellion was ended without bloodshed, when Charles marched his army into Ghent the following year.  The lookout was reportedly drunk from beer, so didn’t notice the army advancing.

As punishment, Charles had the leaders paraded through the city wearing nooses around their necks.  Citizens of Ghent were given the nickname ‘noose bearers’, which they wear nowadays as a badge of honour.  This beer owes its name to the proud citizens of Ghent – the ‘Gentenaars’ – and translates as Ghent ‘sling carriers’.

The beer was first released in 2011, to mark the start of the annual Ghent Festival.  It is a blond ale, with strong yeast aroma, citrus and crisp malt.  The beer is very dry, with lemon citrus and a clean malt profile.

See all of the March 2016 monthly six pack 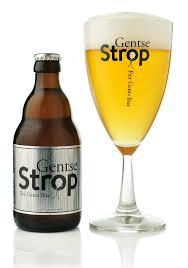