I know these distinctive Alvinne bottles can cause a ripple of panic in the non-sour beer fans amongst you, but there is no need for concern with this beer.  Alvinne beers are always interesting, different, definitely made with passion, and often very difficult to put in a style box.  And that was the case here.

Melchior is a beer that featured in Alvinne’s portfolio in years gone by, but with their growing fondness for all things sour, this beer disappeared some years ago.

But back by popular request, it is now part of what Alvinne refer to as their ‘Vintage Recipe Series’.  I will follow with interest what other gems are given cameos in the future.

The label notes this beer as an Amber Winter Ale, and that is probably accurate enough.  It pours a deep amber and looks reasonably still.  The aroma suggests it’s a bit of a malt bomb, with caramel, brown sugar, dark fruits and alcohol.

When you taste it though the beer isn’t as you might have expected.  There is caramel and dark fruits, an early inviting sweetness that gives way to a spicy bitterness.  And it is quite highly carbonated which lifts the flavours and has them dancing across your tongue.

For a big beer, it finishes quite dry with a definite spicy aftertaste.  That high ABV Is covered off really well, and not even the slightest hint of anything sour!

See all of the August 2021 monthly six pack 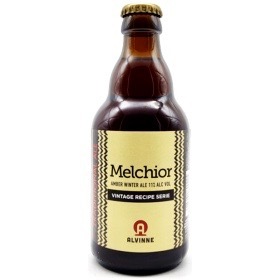