This beer was first brewed as a collaboration between Alvinne and Laugar Brewery from Spain.  Alvinne has retained the recipe as a regular in their lineup.

‘Ich Bin Ein Berliner’ – famous words spoken by President John F Kennedy to convey America’s support of West Germany against the Communists states.  It translates to something like ‘I am a Berliner (in spirit)’.

The meaning when related to this beer is much simpler.  It is a Berliner – that is a Berliner Weisse.  The further play on words is that this beer is brewed using 20% wheat, 30% rye and the remaining 50% barley.  And it of course it contains Alvinne’s famous house yeast Morpheus.

It is a delightfully simple sour beer.  Without being too sour, it can still draw an eye scrunch at the bottom of the glass.

The wheat adds a little something texturally, while the rye imparts and extra peppery prickle.  The beer is crisp and tart, very refreshing with a dry finish. 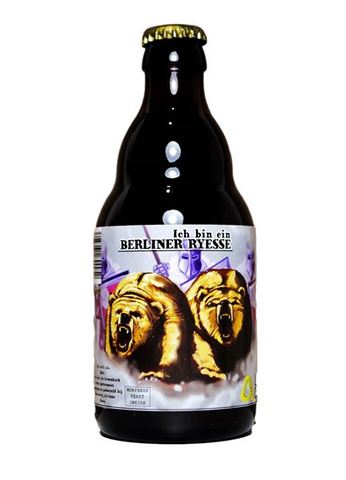