Brasserie Caulier is a family brewery located in the town of Peruwelz, right down on the French border, in the Walloon province of Belgium.

The family started a beer distribution business in 1933, but it wasn’t until 1995 that the owners grandson began brewing.  While they brew beer under three different labels – Bon Secours, Peace Dieu and Pater Damiaan – it is the Bon Secours label that has found by far the most success.

Five different styles are brewed under this label – Blonde, Brune, Amber, Myrtille (a blueberry beer) and the Christmas offering Noel.

Our beer, the Brune, pours quite a dark brown colour with a fluffy white head.  Strong aroma and flavours of ripe dark stonefruit, roasty malts, mocha and some dry spices.  For me it sits somewhere between a Dubbel and a Strong Dark Ale.

Interesting Fact:  when Struise first began in 2003, they produced their beers at Caulier, until they moved to the closer Deca Services brewery in 2006.  So Pannepot used to be made at Brasserie Caulier! 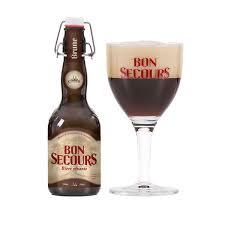 The little bruin from this quintessential farmhouse brewery punches above it's weight in flavour and drinkability.

Brewed without hops, using a mixture of herbs and spice; one of the best 'gruit' style beers you'll taste

A dark, flavoursome brew from one of the smallest breweries in Belgium; if not the world.

A delicious Belgian dubbel style ale, which was the first beer produced by Brouwerij Slaapmutske

The classic trappist dubbel from the monks at the Westmalle Trappist Monastery.