Bruges Zot Dubbel is from the De Halve Maan (The Half Moon) brewery.  It pours an amber brown, with red tinges when held to the light, and a tan foam atop.  The aroma is strong, with bold (at least for the style) spices, toffee, dark stone fruits, cherries and apples.  There is also an earthy quality carrying through.

The flavour is much the same as the nose.  A little caramel malt sweetness and the flavour of dark fruits up front.  This then gives way to a mineral earthiness pairing with the spicing.  This ensures the beer isn't too sweet, and finishes slightly dry.  Medium carbonation and a well balanced flavour profile make for a smooth but clean beer.

Brewery Fact : De Halve Maan has been the only working brewery within the city walls of Bruges since the De Gouden Boom brewery was purchased by the Palm Corporation in 2004.  Although as of recently, they have been joined by a second brewery for the city - though it is at this point a very small scale production facility.  (We will work on getting some beer from them for future packs though!)

The Legend Behind the Name :  - hence the court jester character on the label.  The legend tells that in the mid-1800's the people of Brugse organised a colourful parade of merrymakers and fools to welcome Maximillian of Austria.  At the end of proceedings, the townspeople petitioned him for funds to build a new house for the insane.  He replied "Today I have seen nothing but fools.  Close the doors to the gates, for Bruges is already one large madhouse!"  Since then, the people of Brugse are called 'Brugse Zotten' (fools of Brugse) - hence the jester on the label. 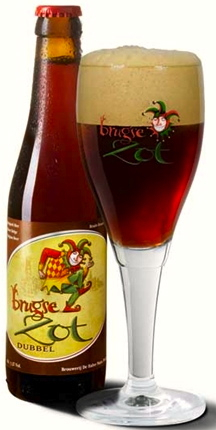